The Scope of the Suicide and Addiction Problem

Suicide, the intentional killing of one’s self, is the 10th leading cause of death in the United States, with an average of 121 suicides per day. In previous years, 44,000 American lives were lost to suicide. Statistics suggest men are more likely to complete suicide, while women are more likely to attempt suicide. Suicide affects Americans of all ages. Sadly, it is the second leading cause of death for 15 to 25 year olds in the US. However, the greatest total number of suicide are by individuals 65 and older.

Suicidal thoughts affect one’s emotional and psychological well-being in a myriad of ways. Individuals with mental health disorders frequently attempt to self-medicate with drugs and alcohol, as drugs can appear to provide temporary relief to combat emotional and mental pain. For example, anxiety sufferers may turn to alcohol to find relaxation in the midst of their stress or to feel more daring and exciting in social situations, and individuals with Obsessive Compulsive Disorder may turn to alcohol to ease inner stress. When this self-medication turns into addiction, the addiction and mental health disorder are known as co-occurring disorders. Common co-occurring disorders include:

90% of individuals who fall victim to suicide have a mental health disorder, most commonly depression. Many who suffer from major depressive disorder have attempted, contemplated, or have fallen victim to suicide.

Post-Traumatic Stress Disorder (PTSD) is another common disorder among those who have fallen victim to suicide. PTSD and suicidal ideation (suicidal thoughts) can be a result of exposure to severe injuries or trauma. Military personnel who have experience trauma such as losing friends in active combat often suffer from PTSD. These feelings of agitation, loss, and panic attacks may lead to increased drug and alcohol use as a source of comfort. Veterans who feel hopeless and abuse alcohol while struggling with suicidal ideation are more likely to attempt or complete suicide. 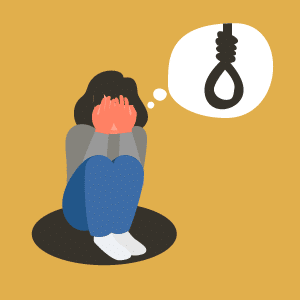 7.9 million Americans have co-occurring disorders, and studies on suicide reveal a strong correlation between suicide and drug or alcohol dependency. Individuals who abuse drugs and alcohol are 10 to 14 times more likely to contemplate, attempt, or complete suicide. Individuals who abuse alcohol, for example, risk increasing their susceptibility to suicidal ideation as depressive states are triggered by excessive alcohol abuse. Mixing substances makes matters worse. Chances of suicide are higher if a patient who abuses cocaine, for example, is prescribed antidepressants or they use alcohol.

Substance abuse challenges, combined with any co-occurring disorders, can lead to suicidal ideation and depression. In many cases, individuals who struggle with substance abuse disorders and attempt to detox from any substance can become extremely depressed as a result. This is one of the many reasons why medically-supervised detox is safer and more advisable than self-detox.

There are risk factors associated with suicide, which can be identified and prevented. Suicide occurs for many complex reasons. Varying factors can contribute to someone’s sense of belonging and identity. Reasons individuals may contemplate, attempt, or complete suicide include:

Other common traits which can influence suicide include:

Behaviors that indicate an increased suicide risk range from oversleeping, increased drug and/or alcohol abuse, insomnia, and speaking of suicide. If a loved one mentions suicide or has attempted suicide, get help now.

A major component of suicide prevention is support and connection. If you or a loved one is contemplating suicide as a result of a substance abuse issue, there is always hope. Many programs are in place to assist in suicide prevention. They provide support and also help individuals needing encouragement.

Rehab facilities are not limited to individuals who are struggling with alcohol and substance abuse disorders. Therapies in rehab facilities can assist with a variety of other conditions, including suicidal ideation. Caring therapists assess patients with addictions, as well as those who suffer from depression and self-harming tendencies. Mental health professionals can provide unique treatments for future patients and offer patients access to support groups for recovery.

Reaching out for help to heal is key. Contact a treatment provider today who can help you change and save your life.

American Foundation for Suicide Prevention. (2017). Retrieved on May 1, 2018 at https://afsp.org/about-suicide/risk-factors-and-warning-signs/

U.S. Department of Veterans Affairs. (2017). PTSD: National Center for PTSD.  Retrieved on May 1, 2018 at  https://www.ptsd.va.gov/public/problems/ptsd-suicide.asp