Codeine is an Opioid used to relieve mild to moderate pain and to reduce coughing. It can be taken as a tablet, but it is also found in prescription cough syrups and other stronger medicine. Though it is considerably weaker than most other Opioids, it works the same way in the brain, inhibiting connections in pain receptors to stifle the body’s reaction. Codeine can have the same dose-dependent adverse effects as morphine, making it no less dangerous. Codeine can stifle coughing by affecting the part of the brain that triggers the body to cough.

Due to its “proven” effectiveness, Codeine has come to be considered as the “gold standard” for prescriptions. Tragically, codeine is the most widely abused opioid in the world due to its euphoric effects. Despite this, Codeine is still widely prescribed across the United States as a quick go-to medication.

As a cough suppressant, Codeine is typically an ingredient in some over-the-counter and stronger, prescription cough syrups. However, Codeine is only a cough “suppressant,” not a cough cure, and so the issue causing the cough will not be treated. Some doctors even believe that using a cough suppressant such as Codeine could make the issue worse, as the body is trying to clear some kind of obstruction from the airways.

Effects of Codeine Use

Using Codeine, as with any prescription, comes with its own side effects, these include:

Despite it being weaker than other pain relievers, and many falsely assuming they can’t be addicted to it, someone can overdose on Codeine. Symptoms of overdose are: 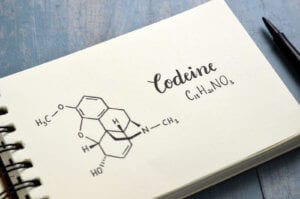 When Codeine is broken down, it releases its metabolite, Morphine. This is what actually causes the effects of Codeine. While uncommon, (13% of the total population), there are people who are unable to metabolize Codeine as intended, the majority of which can’t break it down. This means that Codeine won’t affect them, and they need to switch to a different medication. The rest over-metabolize Codeine, releasing too much Morphine. This can increase the chance of toxicity in the body.

Though not nearly as strong as other prescription drugs, Codeine is just as habit forming, and should only be taken as a doctor prescribes. Because of how much weaker it is, there is a popular misconception that those prescribed can’t develop a dependence. However, the drug is derived from Morphine and affects the same areas of the brain as other Opioids, making it addictive. The risk of addiction rises during long-term Codeine prescriptions, which can last up to several months. It is common for doctors to increase the dose for a patient as they build up a tolerance to Codeine’s effects. This is the first stage of unknowingly developing a tolerance, which can lead to addiction.

Despite the fact that it is weaker than most Opioids, someone recovering from an addiction to Codeine will still likely face the challenges of withdrawal. Codeine withdrawal is a necessary aspect of Codeine detox, an important step in overcoming Codeine addiction. Withdrawal occurs because the body has become so accustomed to the presence of Codeine that it can no longer function “normally” without it. When the drug is no longer present, the body’s system struggle to adapt. These can begin as soon as a few hours after the last dose and can include, but are not limited to:

These symptoms of withdrawal can apply a lot of pressure on someone suffering from addiction to relapse, especially without medical assistance to manage the pain. Checking into a clinic and seeking assistance in recovery can be invaluable in achieving sobriety.

If you, or someone you know, have turned to abusing Codeine then please reach out today. There are dedicated treatment providers ready to help. All you need to do is contact one now.

Cooper Smith earned his Bachelor’s in Writing for Entertainment from Full Sail University. While he was initially interested in a career in television, he saw an issue in his community and felt compelled to do something more. Now, he uses his knowledge to reach out to people who may need help and make the public aware of issues we are facing as a society. When he isn’t behind a computer, Cooper travels somewhere new.

Drummer, Olaf. (2016). Weekly Dose: Codeine Doesn’t Work for Some People, and Works Too Well for Others. Retrieved March 26th 2018 from  https://theconversation.com/weekly-dose-codeine-doesnt-work-for-some-people-and-works-too-well-for-others-58067