Methamphetamine, or Meth for short, is a synthetic stimulant that is commonly produced in illegal labs (especially in Europe, Mexico, and the United States) and at home by amateurs. Meth can be mixed with several other drugs for an even greater, more dangerous, high. Meth is “cooked” by mixing several ingredients with other chemicals until the liquid Meth reacts with hydrogen chloride gas to form crystalized salt that is then filtered and dried. Small personalized labs can be found anywhere from hotel rooms to the middle of the woods, and even in the back of someone’s trunk, while bigger labs are usually inside abandoned buildings or warehouses.

“Crystal” Meth gets its name from the blue-white rocks that harden once the process is complete. Derived from Amphetamine in the 20th century, Methamphetamine gives you a boost of energy. Awareness increases, pulse starts to race, and you feel a pleasurable feeling throughout your body. This feeling however, does not last long, and the detrimental effects it takes on your body far outweigh any pleasures Meth might create.  Its highly addictive features have earned Meth the classification of a Schedule II drug that is largely banned but is still legally available as medicine.

Medically, Meth can treat Attention-Deficit/Hyperactivity Disorder (ADHD) and has even been used for weight-loss. As a street drug, Meth can be snorted, smoked, injected, or taken orally.  Those who want to feel the rush of the drug immediately typically snort or smoke the drug. Abusing the drug in this way provides a quick burst of intense feelings, lasting only a short couple of minutes. Those who choose to abuse the drug by snorting or swallowing it enable a slightly longer sensation of euphoria, but one that takes about 5 times as long to kick in.

No matter which way the drug is ingested, the rush will not last longer than an hour. The intense feelings peak rather quickly even though the drug is still within the bloodstream. Short bursts of its effects influence the user to take more in a sporadic pattern.

Meth’s intense rush has the ability to get you hooked the very first time you use it. Abusing Meth has caused countless cases of homelessness and has destroyed the lives of thousands of people. Abusing Meth regularly can cause sores and lesions upon the face and skin. Meth also rapidly ages the face and can sink in your cheekbones, making you look very ill. A lot of Meth users pick at the sores on their face, making their skin unhealable. Users might be ashamed of how they look and what has become of their lives as a result of Meth, yet sadly still continue abusing the drug due to the rush their brain has become addicted to.

Crystal Meth and Methamphetamine are extremely similar in the chemical makeup within each drug. Meth can come in a pill or white powder while Crystal Meth comes in white or blue crystals. Both can be abused in the same way to achieve the desired high.

Some common street names for Crystal Meth include:

Common street names for Meth include:

How Dangerous Is Meth? 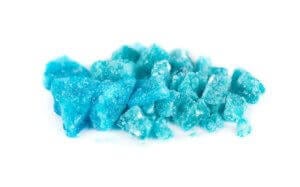 Meth can be extremely dangerous both short-term and long-term. One use can trap you into addiction, replacing all the positive influences within your life. Meth works by flooding the brain with an extreme amount of dopamine, the natural chemical that produces good feelings. As Meth rapidly increases dopamine in the brain, it destroys dopamine receptors, weakening the body’s ability to feel pleasure over time.

Some short-term effects of Meth can include:

More intense, long-term side effects can include:

Meth can affect your brain’s ability to function properly in areas such as coordination, verbal learning, memory, and other cognitive features. Blood vessels and tissues are the first to become damaged, leaving the skin with acne and sores. Developing Parkinson’s disease is also a big risk for those who abuse Meth.

Meth mouth is the decline oral health due to abusing Meth. The teeth start to discolor, rotting and decaying throughout each passing day. Acid within the mouth eats away at tooth enamel, bringing greater chances for cavities. Yellow rotting teeth eventually become black, eroding the gum line and destroying the entire mouth’s health altogether.

Treatment for a Methamphetamine Addiction

Methamphetamine is one of the most dangerous and detrimental drugs to your health and overall well-being. It doesn’t help that Meth is so readily accessible and not very expensive. The effects of Meth can overtake your life from the very first time you ingest the drug, making it even harder to quit and turn your life around. Recovering from a Meth addiction is not easy, and nearly impossible to do on your own, but is critical to returning to a balanced state of health and well-being. The first step to recovering from Meth addiction is detox at a recovery center. If you or someone you know has developed a Meth addiction,  contact a dedicated addiction specialist for help. Meth can take everything away from you, we’re here to help get it back.

Jasmine is the Digital and Social Content Specialist for Recovery Worldwide. She has a deep passion for writing, especially on topics that educate the audience and encourage action towards a healthy life. She hopes her words inspire those in need of help to take that first step in finding the best treatment for their addiction so they can live the life they deserve.

DrugAbuse.com. (2018). The Effects of Meth Use. Retrieved on May 8th 2018 at https://drugabuse.com/library/the-effects-of-meth-use/

Drug-Free World. (2018). What is Crystal Meth? Retrieved on May 8th 2018 at https://www.drugfreeworld.org/drugfacts/crystalmeth.html

Drug-Free World. (2018). What is Meth Made From? Retrieved on May 8th 2018 at https://www.drugfreeworld.org/drugfacts/crystalmeth/what-is-meth-made-from.html

Frontline. (2011). How Meth Destroys the Body. Retrieved on May 8th 2018 at https://www.pbs.org/wgbh/pages/frontline/meth/body/

NIH. (2017). Methamphetamine. Retrieved on May 8th 2018 at https://www.drugabuse.gov/publications/drugfacts/methamphetamine

Web MD. (2018). Crystal Meth: What You Should Know. Retrieved on May 8th 2018 at https://www.webmd.com/mental-health/addiction/crystal-meth-what-you-should_know#1