Lysergic Acid Diethylamide (LSD) was originally developed in 1938 as a Stimulant. It wasn’t until 5 years later that its Hallucinogenic property was discovered. This propelled the drug through extensive trials to be used as a potential treatment for schizophrenia and other mental illnesses. By the 1960s, it had made its way to the streets, attracting a massive following of people who enjoyed the Psychedelic nature of the drug. While it is not nearly as popular as it once was, LSD is still a substance commonly found at clubs and raves. The drug is most commonly referred to as “Acid,” other names it may be called, however, are:

The Effects Of LSD

LSD is most often touted for its Psychedelic effects. Going on a “trip” is experiencing hallucinations brought on by the drug. For many who have abused the drug, they treat this as a mystic experience, believing that what they experience under the influence of the Psychedelic can show them some deeper truth. The truth, however, is that the drug can’t show you anything more than what you already know. People under the influence of LSD may experience:

LSD use also causes physical symptoms. These, however, aren’t as widely discussed as the recounting of what people experience under the drug’s influence. These side effects include:

While none of these alone may seem inherently dangerous, any one of these effects can be severe enough that someone will need to seek medical attention. The combination of any of these symptoms could be reason to go to the emergency room, as someone could be in a life-threatening condition without fully realizing it. 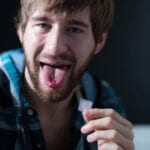 While using LSD today is still illegal, it is being tested as a new way to promote concentration, help creativity, and reduce stress. Online forums and unofficial testing have claimed miraculous effects, but all of these must be taken with a grain of salt. Without official testing, there is no way to guarantee the validity of these claims. Moreover, someone can only procure LSD illicitly. This means there is no oversight or consistency that comes with supply chains. Taking LSD, or any drug, from a dealer off the street can work fine once but have totally different effects the next time depending on the purity and formula of the substance.

While certain Hallucinogens can be addictive, LSD does not trigger drug-seeking behaviors. It does not produce a craving for more or cause symptoms of withdrawal from going without it. That being said, this does not make it a safe drug.

Despite it not causing addictive behavior, LSD does produce a tolerance. This means that people who repeatedly take the drug will need more to experience the same effects. This is a dangerous behavior, as taking Hallucinogens in higher doses can increase the risk of overdose and potentially death.

While nothing about LSD can cause a physical addiction, it is still possible to trigger a behavioral addiction. In the same way that people can become addicted to certain behaviors, compulsions, or even non-drug substances, someone can become addicted to a non-addictive substance. This could come from the way that it makes them feel, or even because it has become a release for them from their life or some past trauma. Because LSD would be a behavioral addiction, it is important to find a treatment center that understands what underlying behaviors can trigger the addiction. If you or someone you know is addicted to LSD, but you don’t know why or where to start, reach out to a dedicated treatment provider. They are here to listen and help get you on the path to recovery.

Cooper Smith earned his Bachelor’s in Writing for Entertainment from Full Sail University. While he was initially interested in a career in television, he saw an issue in his community and felt compelled to do something more. Now, he uses his knowledge to reach out to people who may need help and make the public aware of issues we are facing as a society. When he isn’t behind a computer, Cooper travels somewhere new.