What Is Valium Detox?

Valium detox is the first step towards recovery from Valium addiction. Valium, or Diazepam, is a prescription Benzodiazepine that is used to treat symptoms of anxiety, seizure disorders, muscle spasms, chronic sleep disorders, and side effects of alcohol withdrawal. The medication produces a mild tranquilizing effect. It works by calming the brain and nerves; Valium is a Central Nervous System depressant that influences receptors of the neurtransmitter GABA.  This results in decreased nervousness and agitation and elicits a sense of calm and relaxation. This is also how it produces a decrease in severity of anxiety and panic attacks. Although helpful in treating a number of psychological and physical health issues, Valium is extremely addictive and has become one of the most commonly abused prescription drugs on the market.

People can become addicted to Valium after just a few days of use, but those that take the medication for longer periods of time are more likely to build up a tolerance and develop a dependency on the drug. When taken illicitly for recreational purposes or at higher doses than prescribed, Valium produces an intensely euphoric, “drunk-like” high.

The first step in treating a Valium addiction is detox, or detoxification. Detox is used to safely rid the body of the Benzodiazepine drug so that a user may proceed to the next stage of addiction treatment. Valium detox should never be done alone or without the presence of a medical professional as the effects of withdrawal can be dangerous. In addition to experiencing withdrawal symptoms, the medical symptoms that Valium was originally prescribed to treat often recur during detox.

The Process of Valium Detox 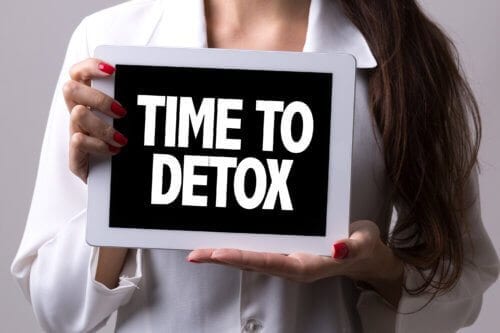 Detox from Valium is typically conducted by means of the tapering-off method. Tapering off Valium includes progressively reducing the dose over the course of a few weeks until use eventually stops completely. Tapering off Valium allows the user’s brain time to slowly readjust to having to produce certain chemicals, such as GABA, on its own. Tapering can help reduce the severity of symptoms and shorten the time it takes to complete withdrawal. Furthermore, it reduces the risk of complications, such as seizures or tremors.

Quitting Valium “cold turkey” (abruptly stopping usage after prolonged, consistent use) is never recommended, as once physical dependence to Valium has developed, discontinuation of use will be accompanied by symptoms of withdrawal. Researchers have found that a sudden withdrawal from Valium produces a stronger set of symptoms than weaning use. Tapering off the medication allows for a user’s dependence to slowly decrease and, in turn, lessens the extremity of withdrawal. Withdrawal effects can range from mild to severe and typically begin to appear between 1-4 days after taking the last dose.

The severity of withdrawal for a person depends on a number of factors, such as how long they used Valium, how much Valium they used, if they used any other drugs with Valium, and any underlying mental or medical issues. The most severe symptoms are typically confined to rapid withdrawal from high doses of Valium or when the user quits “cold turkey.”

The acute phase of Valium withdrawal typically starts 1-4 days following the last time the drug was used and can last upwards of a few weeks. Recovering users normally see a peak in severity of symptoms around 2 days. During this initial stage, an individual will experience the majority of the common withdrawal side effects, such as the flu-like symptoms, anxiety, depression, and intense cravings for Valium.

The protracted phase of Valium withdrawal occurs after initial withdrawal and can last anywhere from a 6 months to 18 months. Also known as Post-Acute Withdrawal Syndreom (PAWS), it is characterized by wave-like occurrences of symptoms that then alternates with periods of normality that gradually extend in frequency until complete recovery. The symptoms that are most likely to be long-lasting and occur during the protracted phase are anxiety, insomnia, depression, restlessness, mood swings, irritability, diminished appetite, anxiety, and panic attacks.

People that are addicted to Valium should look for treatment centers that offer medically assisted Valium detox. In this setting, physicians constantly monitor patients during detox and are able to prescribe medications to prevent and/or reduce the debilitating effects of withdrawal. Symptoms that Valium was originally prescribed to treat, such as anxiety, also tend to recur at stronger rates during detox. Medical staff may provide additional treatment to help manage these symptoms, decreasing the chance of relapse. Some of the medications utilized to aid patients during the process of Valium withdrawal include:

Once withdrawal and recurring symptoms are managed, the next step of treatment may begin, which is typically therapy. Comprehensive therapy can help people address the root causes of their Valium addiction and identify strategies to prevent relapse. This is an extremely important part of the recovery process, as therapy teaches individuals how to properly deal with their addiction and reduce chances of relapse.

Getting Help With Valium Detox

If you or a loved one is struggling with a Valium addiction, don’t worry; there are multiple inpatient and outpatient rehab programs that can help and offer safe detox treatment plans. Reach out to a dedicated treatment professional, and learn about your options today.